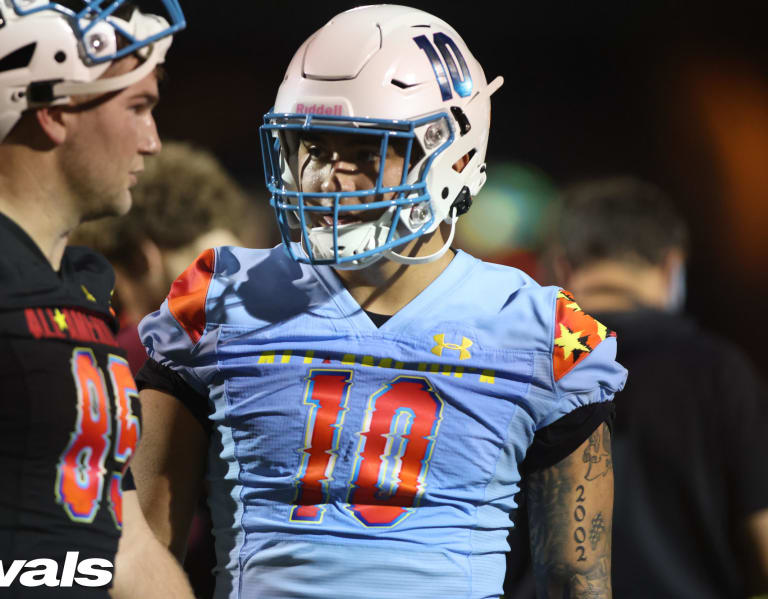 Florida State quarterback signee A.J. Duffy made quite the impression with strong showings during the first two days of practice for the Under Armour All-America Game in Orlando, and he sat down with Warchant on Thursday night to recap how things have gone so far.

Duffy talks about playing with many of the top high school seniors in the country, his confidence level in these settings, how excited he is about spring practice at FSU, the Seminoles’ new WR transfer additions and more.

The Under Armour game is scheduled for this Sunday (2 p.m. ET, ESPN2) at Camping World Stadium.

“I don’t know Mycah (Pittman) too well, but I do know Johnny (Wilson) pretty well with him being a younger guy from So Cal, so I see him around a lot at at 7-on-7s and different places . I’ve been texting with both of them a lot since they jumped on board. I’m really fired up to have both of them at FSU. I can’t wait to get to work.

“With Johnny, he’s 6-foot-7, he can run and catch — matchup nightmare for anyone, I think”

On arriving at the Under Armour event earlier this week

“The very first day I got here was Tuesday. When we arrived here, we got sized for everything like shoes, shirts, clothes, jerseys, everything, Got all our gear, and got the lay of the land of all the things we are going to be doing this week and the plans.

“This was also a time where I could hang out with some of the players. I was with my guy tight end Jack Pedersen for a while since I have known him for a long time on the West Coast. I also hung out with Domani Jackson a lot since I know him from California. Really, there were so many guys that I knew from seeing them at different events. Sam (McCall) is my guy for sure, and I was around him a lot too. It was so cool to see him again. But to be honest, we text a lot with each other, so the communication is always strong. That’s my guy.”

On the opening days of practice in Orlando

“The first day was really a walk-through, getting to know the players and seeing who is who. Learning the things with the counts on the routes, small things. Knowing what receivers like and connecting with them. It actually started slow but then turned into a real practice type of thing once things picked up with the receivers. It wasn’t an adjustment to me. Football is football, and it’s throw it to the open guy, so I don’t think a lot has changed there. It’s very competitive.

“I thought the first day I was pretty accurate, and the ball was really coming out of my hands very well these first two days. The deep ball has felt good to where I wanted the passes to be. So it has been going very well.

“The second day, we put the pads on, so it kind of got real from there. We did everything. We did mesh with the running backs, airs with the receivers, [pass] skeletons with the offense, team, and a lot of individual one-on-ones … it felt like a real practice.

“I feel I’m a pretty confident guy regardless in what I can do and what I see. With these receivers, they are so elite, so you put it in the right place and they are going to make you look good. It makes my job pretty easy with these receivers.”

On building a connection with specific receivers, Sam McCall

“I felt I had a great connection with all the receivers through the past two days. Me and Luther (Burden) have been connecting well since Future 50 last year. I think I threw him like four or five touchdowns there. I would say I’m the most comfortable with Luther, but I feel great about all the guys. They can all go and are very special playmakers.

“I think with Luther, he has that look in his eye. And when he wants to go get it, he’s going to do it, and I have a lot of faith in him on the routes. It was also great being around Jack (Pedersen). J.P. always finds ways to get open. He’s a guy you can use in so many ways because of how versatile he is on his routes. I know what battles he’s going to win and where he’s going to be, so being around him again for this was special.

“Sam (McCall) is on my team. Most of the time I don’t go after him because he’s so locked down with his side. But I do go after him to keep him on his toes. Throw at him a little bit. I’m not a big trash-talker, but I will mess around with Sam a little bit in talking. Sometimes on the sidelines.

“I think what makes Sam difficult (to throw against) is he’s a very smart player and his length, range and speed is very good. It looks like a guy is open, but Sam could be baiting you because he’s got such great make-up speed that you have to adjust to those things with Sam.”

On his confidence and adjusting to different environments

“I think my confidence and how I adapt is my Dad’s preparation with me as a quarterback, where I’ve been sitting in meetings since I could read or write. Drawing up plays, being around ball my whole life. My Dad is so dialed in with everything, it has helped me adjust to any situation.

“When I’m around players that I know or don’t know. I’m just a cool, chill guy and relaxed. I just treat them like I would any of my friends. On the field, I think the receivers like how I put the ball in their hands or a throw a pretty ball. Some [of these players] I have met for the first time. I knew Jayden Gibson and Evan Stewart. With Evan, he’s so fast, ready on his routes and a ball of energy. He’s a cool guy to be around”

“I would say the first two days of practice have gone about how I thought they would so far. There are also new things I’ve learned with the offense, but I’m pretty quick at picking that stuff up. We are running multiple offenses. Sometimes spread, tight end sets, and sometimes out of the pistol. Few read-option things, but it’s very multiple on everything. We do everything out of the shotgun.

“I don’t think there was much adjustment for me, as I said. I think most football practices are scripted, so it wasn’t really a surprise. Each period might adjust, but the general principles of doing skeletons, individuals is going to be there.

“I’m excited about this week, but I’m also excited about arriving at FSU on Jan. 3, to start everything. The biggest thing for me really is learning the offense, getting in the weight room with the college guys and just getting in the best shape so I’m totally ready for spring ball. Ready to compete and get better.

“It’s a chill environment here. Most of the guys are already signed, so not really recruiting. I have put it in some guys’ ears that if their school didn’t work out and they hit the portal to hit me up and let’s hook up at FSU. That’s about it.

The Under Armour experience in Orlando, outside of football

“We had a lot of fun the last two days. It’s been a blast so far. First, there’s a mansion we go to that has Under Armour stuff everywhere. Music playing, and then today we also went to the Under Armour volleyball game, which was a lot of fun to me. Crazy experience there. Then we just had a dinner tonight that was really crazy that was on the lake. All of it was really fun. Loved it all.

“I have talked with him before. I’m really big on Coach Tokarz, and he has a really good relationship with my Dad. I feel he’s going to get me ready for the next level. He’s a very sharp guy that knows his stuff. but yes, we have talked a lot when I visited FSU. So I know him pretty well. He is very likable, relatable to me.

“I’m super excited about everything Coach [Mike] Norvell is doing and really pumped about spring football. This is what you dream about as a young kid in competing and going after your dream. I’m ready to get to work for sure.

“I would say with the spring camp, I want to get adjusted to the speed of everything. Football is football. But learning who is going to be where and the speed. When it comes to the battle for the job, I don’t really think about winning or losing. I do my best and let the play do the talking.