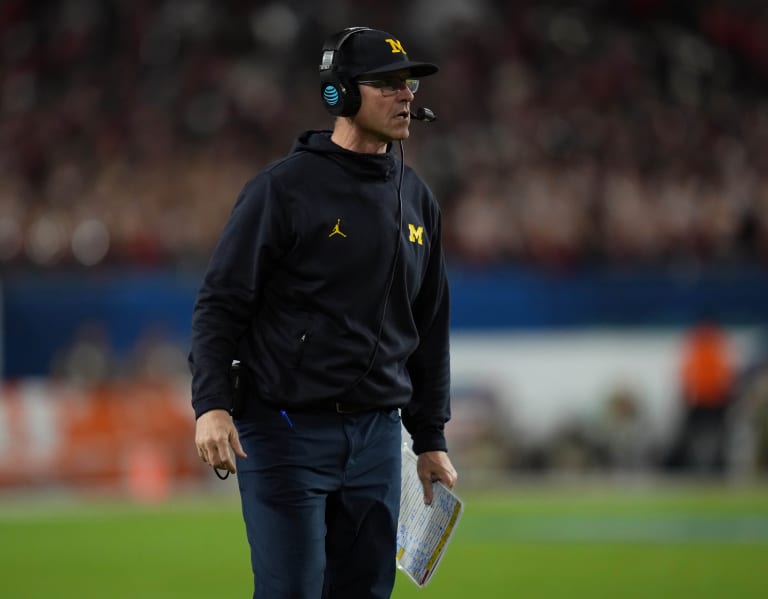 Michigan head coach Jim Harbaugh, quarterback Cade McNamara, and linebacker Josh Ross met with the media after Michigan’s 34-11 loss to Georgia in the Orange Bowl and reflected on the game, the season as a whole, and the future.

For everything they said, check out the transcript below courtesy of the Orange Bowl.

JIM HARBAUGH: Congratulations to Georgia. They played a heck of a game in all phases. I loved the way our guys fought. It wasn’t our best, but certainly was theirs. They played extremely well.

Q. How did you feel about the team’s physicality tonight, particularly on offense, against Georgia’s defensive front?

JIM HARBAUGH: Yeah, it was a heck of a football fight tonight. They got the better end of it, but I thought it was physical on both sides of the ball. Yeah, really their execution on the perimeter, too, was extremely good. They played well. Got to give them credit for that.

Q. The way things started with them getting off to I think it was a 17-0 lead, scoring touchdowns in their first couple of drives, how much did that take you out of what you guys do best and wanted to do because they were able to negate some of your pass rush and you guys kind of were forced to throw the ball a little more often early on?

JIM HARBAUGH: Yeah, they did a very good job early in the game, first half especially, of extending drives. They were able to bleed out yards on the perimeter with some of the bubbles and swing routes. Then hit the big play. They got the swing route early to Bowers, that was big, and we lost the ball on the lights on the deep throw. They were able to bleed out the yards and pick up the 1st downs. I thought they were really effective, and on 1st down, they must have had eight or nine 3rd-and-shorts. They were able to get the ball to 3rd-and-1, 3rd-and-2 and convert those 1st downs and keep the chains moving and couldn’t get them out of that rhythm early.

Offensively we were able to make just about every drive we had had a 1st down in the first four drives. We had one three-and-out, and then weren’t able to convert, make the big play, get the ball into scoring territory. Had some 4th downs, didn’t convert those, and then unfortunately we turned the ball over a few times, and then we lost the ball in the lights one time on an offensive throw and they got an interception in the end zone.

Got to give them credit. They executed well. Game plan was good, and we weren’t able to keep pace.

Q. I know it’s tough after a game like this, but could you share what you had to say to your team after this game or maybe what your thoughts are on putting this game into perspective with the whole season?

This team won’t be together fully next year. It’s still a beginning for this team. This is about when our guys — Josh Ross to my left here and Cade McNamara to my right, that’s when it began last year, and it’ll begin anew this year. Start of a new year.

Proud of them, the way they kept fighting. I could say they were — there’s never any quit in these guys. It’s a very resilient — ton of resolve with this football team, and as I said, to me it feels like a start. Feels like a beginning.

Q. You keep on saying that this feels like a beginning. How do you look forward to being able to build on what happened this season? What are the steps that you feel you have to take in order to be able to come back and win a game like this?

Q. You guys were down 34-3 in the fourth quarter. You guys were able to score a late touchdown. What can you say about that successful drive that you did have towards the end of the game, because there was some success for you guys?

JIM HARBAUGH: Yeah, we were able to get that one in. Our offense was moving the ball there in the second half. We had those drives — could have converted on two drives before, but got to give credit to the Georgia defense. They’re a tough team to score on. Like I said, our guys keep fighting, the way they always do.

Q. Cade or Josh, how could this loss against Georgia potentially affect how you guys view your season as a whole?

CADE McNAMARA: I think obviously it’s very disappointing right now. I mean, we gave everything we got, and we got beat tonight. But I think once we give it a little time, we’ll be able to appreciate a lot of the great things we were able to accomplish this season, but after a loss you’re obviously going to take it hard, and we’re a competitive group, but that’s not going to take away from the great things that we had this season, as well.

JOSH ROSS: Yeah, to piggy-back what Cade said, we did accomplish great things this year, and although it is a disappointing way to end it, we did do great things this year, and we can’t forget about that. Today we got outplayed and it wasn’t the best game for us, but as far as the season, as far as a whole, we had so many great moments with our group. Such a great culture that we’ve built here, and like Coach Harbaugh says, it’s just the beginning of what we are building and moving on to next year.

Q. With J.J. finishing things out, I’m sure you guys don’t have to imagine too hard that the quarterback situation will be a topic of conversation for you guys from now until you take a snap again in September. Jim, do you feel the way the game ended has any bearing on how that decision proceeds? And Cade, what was it like having to watch the last few drives from the sideline after the way things had gone?

JIM HARBAUGH: We know we have two great quarterbacks. We make no apologies for that. I felt we just weren’t — the protection just wasn’t as good as it needed to be, and J.J. gave us more of a chance to escape it, avoid it and run because that was the reason we made that switch. Like I said, we’ve got two great quarterbacks. We make no apology for that.

Q. Jim, it looked like Georgia was able to get some one-on-one match-ups with Bowers and Cook. Can you just describe the chess match there? Were those formations that you expected or did they throw some new wrinkles at you?

JIM HARBAUGH: Yeah, I mean, the swing route to Bowers, it looked like they hit a sluggo there with their running back on our linebacker, same exact play we have in our offense, and ran it toward the end of the game there when you saw Donovan matched up on their linebacker. He ran the same exact sluggo — slant go, and were able to hit that, too. That match-up we were looking for, they got, and both teams were able to convert it.