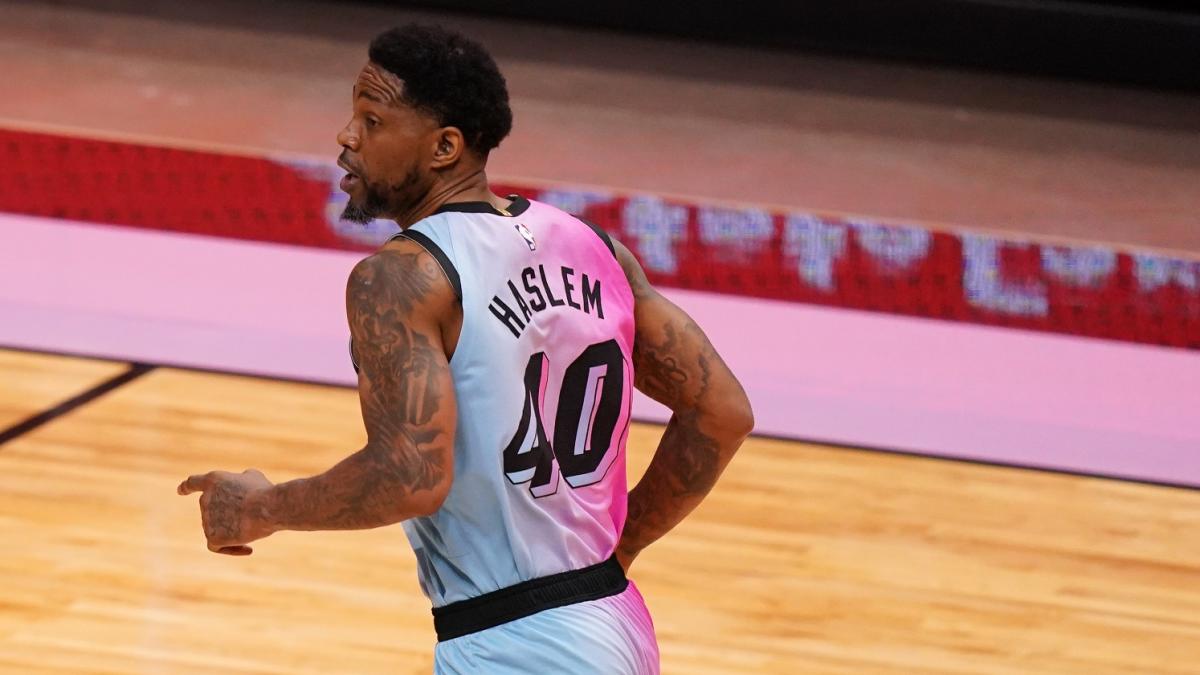 They say age is just a number, but that number is all too important if you’re an NBA player.

Few players are able to stick around into their 40s. There’s no Tom Brady or Zdeno Chara in the NBA, as legends rarely play into their mid-40s. The current crop of the oldest NBA players is actually relatively young, but there are still a few out there that are still making an impact on NBA rosters.

Here are some of the oldest players in the NBA entering the 2022-23 season and in league history:

Who is the oldest active NBA player?

Remembered for his days as an enforcer on the Big 3 Miami Heat of the early 2010s, Haslem is still playing for the franchise. He’s been with Miami since signing as an undrafted free agent in 2003, making him the longest-tenured player in franchise history.

Haslem has played just 58 games combined in the last six years, as he essentially serves as an assistant coach at this point in his career. He appeared in 13 games last season, totaling 32 points and 15 fouls in 83 combined minutes of action.

Iguodala will return to the Golden State Warriors for his 19th and final season in 2022-23 before officially retiring.

The 2015 NBA Finals MVP began his career in 2004 with the Philadelphia 76ers, playing eight seasons in Philly before a year with the Denver Nuggets and seven with the Warriors. A three-time champion, two-time All-Defense and one-time All-Star, Iggy has averaged 11.4 points, 4.9 rebounds and 4.2 assists in 1,223 career regular season games.

Just a few years ago, it seemed unlikely that Anthony would ever join this list. The No. 3 pick in the loaded 2003 draft, Anthony spent his first 14 seasons with the Denver Nuggets and New York Knicks. After a disappointing 2017-18 season with the Oklahoma City Thunder, Anthony joined the Houston Rockets for 2018, where he played just 10 games before the team asked him not to return, and he appeared to be exiled from the league.

The Portland Trail Blazers took a chance on him with a non-guaranteed deal in 2019 and he rebuilt his value as a reputable role player. Anthony averaged 13.3 points per game off the bench for the Los Angeles Lakers last season, proving he’s still capable of contributing, but he’s still a free agent.

The only thing King James is playing for these days is more championships. In 19 years with the Cleveland Cavaliers, Heat and Lakers, James has averaged 27.1 points, 7.5 rebounds and 7.4 assists in 1,366 regular season games. He’s also played 266 playoff games, more than any player in league history. It might be time for James, who turns 38 in December, to start scaling back in the regular season to preserve his body.

A second-round pick in 2006, Millsap has exceeded all expectations throughout his 16-year career. His first seven seasons with the Utah Jazz were solid, as he developed into a starting-caliber forward, but everything changed when he signed with the Atlanta Hawks in 2013. He was an All-Star every year he played for the Hawks, averaging 17.4 points and 8.3 rebounds across four seasons.

Millsap’s emergence with the Hawks paid off when he signed a three-year, $90 million deal with the Denver Nuggets in 2017. He never found the same success in four seasons with Denver, transitioning into a supporting role. Last year, he split time with the Brooklyn Nets and Sixers after being included in the Ben Simmons-James Harden swap, but he’s currently a free agent.

Who is the oldest NBA player ever?

The oldest NBA player of all-time dates back to 1948. Nat Hickey coached the Providence Steamrollers in the 1947-48 season, but moved himself to the active roster after the team got off to a 4-25 start. He played just two games just before his 46th birthday, scoring a total of two points, committing five fouls and shooting a combined 0 for 6 from the field in two losses.

The numbers are ugly, but just by stepping on the floor Hickey set a record that still stands over 73 years later.

Unlike Hickey, Kevin Willis played a long career in the NBA before retiring at the age of 44 in 2007. Willis’ career began in 1984 when the Atlanta Hawks selected him at No. 11 overall. He stayed in Atlanta through 1994, averaging 14.1 points and 9.7 rebounds over 11 seasons. In 1992, Willis was named to his only All-Star Game after averaging 18.3 points and 15.5 rebounds that season.

After being traded to the Heat in 1994, Willis spent the second half of his career bouncing around as a solid role player. He later played for the Warriors, Houston Rockets (twice), Toronto Raptors, Nuggets, San Antonio Spurs, Hawks (again) and Dallas Mavericks. Willis won a title with the Spurs in 2003, averaging 2.6 points off the bench in 18 playoff games when he was 40.

Robert Parish played to an older age than any NBA player who made the Basketball Hall of Fame, retiring in 1997 just before his 44th birthday. The Chief started his career with the Warriors, playing four seasons in The Bay before being traded to the Boston Celtics, Parish spent the next 14 seasons in Boston, winning three titles and being named an All-Star 14 times. Along with Larry Bird and Kevin McHale, Parish helped form one of the first “Big 3’s” in NBA history.

Parish’s final three NBA seasons were spent as a backup. He played with the Charlotte Hornets behind Alonzo Mourning for two years, then finished his career in 1996-97 playing with Michael Jordan, Scottie Pippen and the Chicago Bulls. He appeared in just two playoff games at the age of 43, but the Bulls won the NBA Finals and Parish was awarded his fourth ring before officially retiring that summer. Parish is the oldest player to win a championship.

Throughout his 22-year career, Vince Carter went through plenty of transformations. Carter shined with the Raptors in his early years, with iconic moments in the Slam Dunk Contest and the 2000 Sydney Olympics. After a messy exit from Toronto and subsequent trade to the then-New Jersey Nets, slowly evolved from a superstar into a role player.

Carter spent time with the Orlando Magic, Phoenix Suns, Dallas Mavericks, Memphis Grizzlies, Sacramento Kings and Atlanta Hawks before finally retiring in 2020. With the COVID-19 pandemic looming, Carter entered what would be his final game in March 2020 and buried a 3-pointer on the final possession of the Hawks’ loss. He’s likely to join Parish in the Basketball Hall of Fame once he’s eligible.

Before starring in an unforgettable commercial, Dikembe Mutombo was a Hall of Fame NBA player. He was drafted No. 4 overall by the Nuggets in 1991, playing five seasons in Denver before signing with the Hawks in 1996. In nine full seasons with the Nuggets and Hawks, Mutombo averaged 12.7 points, 12.3 rebounds and 3.6 blocks per game while winning Defensive Player of the Year four times.

Mutombo was traded to the Sixers in 2001, joining the team just in time for their run to the 2001 NBA Finals. His play drastically dropped off in the following years due to injuries and age. The final years of Mutombo’s career were spent with the Nets, Knicks and Rockets before he retired in 2009 at 43 years old. He was inducted into the Basketball Hall of Fame in 2015.