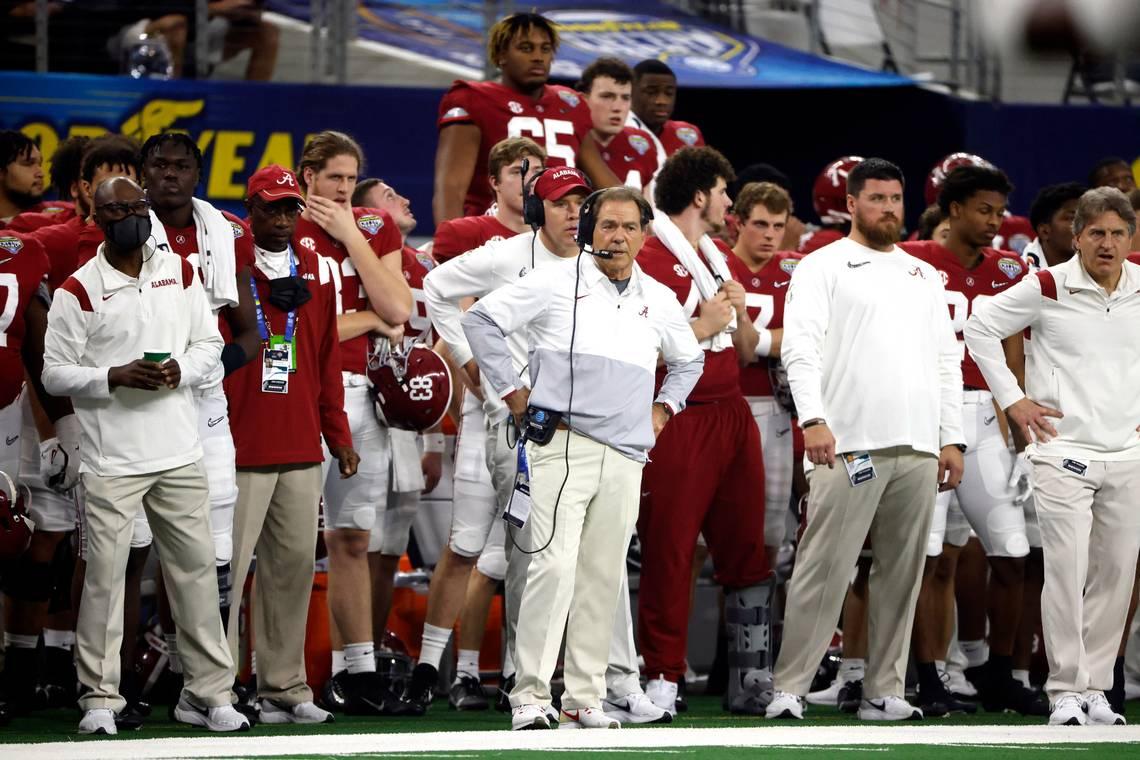 The Bearcats earned the right to be embarrassed by ’Bama, and deserved every part of the 27-6 Tide whuppin’ on Friday afternoon in the Cotton Bowl in the BCS Plus 2 Football Tournament.

All of us underdog lovers were kidding ourselves that UC was going to hit a “Hoosiers” jumper to pull off what would have been the biggest upset in the history of the college football playoffs, and a major college bowl.

No sport needs a genuine upset any more than college football, but they aren’t possible because Nick Saban and Alabama have ruined this level of the sport.

A dominant player, or team, is brilliant marketing for any sports league. Michael Jordan did wonders for the NBA, the same for Tiger Woods and the PGA Tour.

There is nothing else that manufactures the type of interest that comes with supremacy.

But what Saban and ’Bama are doing to college football doesn’t feel like good marketing as much as it does a radio station playing the No. 1 hit 24 hours a day for 10 straight years.

What Saban and ’Bama have done is to combine Jordan, Tiger along with Simone Biles, Novak Djokovic, Floyd Mayweather, Serena Williams, Tom Brady and Jeff Bezos to produce some sort of super team that is so good that no one else has a prayer.

The only suspense with an Alabama game is if it covers the point spread.

What happened on Friday afternoon was not the fault of the College Football Playoff selection committee. The fools who pick the final four teams got this selection right.

Cincinnati deserved to be at AT&T Stadium on New Year’s Eve day. The Bearcats neither embarrassed themselves, nor the selection committee, against Alabama.

Cincinnati looked no different than Notre Dame did last season when the Irish were stomped by the Tide in that semifinal, the COVID-relocated Rose Bowl, also played at here at AT&T Stadium.

Cincinnati looked not too much different than Oklahoma when ’Bama popped the Sooners in their 2018 semifinal, the 2018 Orange Bowl. (That one actually wasn’t played at AT&T Stadium.)

Cincinnati looked no different than most of the SEC teams ’Bama has routinely kicked around over these last 12 years.

’Bama gave Cincy a few chances to be in the game in the first half, but the Bearcats capitalized on none of them.

As evidenced by the first drive of the game, Cincinnati does not have the talent up front to push ’Bama. Not many teams do.

Even though Saban has modernized his offense and will throw it all over the place, in the first drive the Tide just went old school and ran the ball. There was no reason to be cute.

The Bearcats defense allowed an average of 137 yards per game this season. By the end of the first half, the Tide had 302 yards. On the other side of the ball, 60 of Cincy’s 76 first-half yards came on its opening drive.

Don’t bother looking at the stats. You get the idea.

Say what you will about Cincinnati, but this felt like more of an actual game than any of these:

The Bearcats were never going to win this, but to watch it all play out was depressing.

This isn’t even one of Saban’s better teams, and even with that the Tide has lost only once this season. Alabama’s 41-38 loss came at Texas A&M on Oct. 9.

So now Alabama advances to the national title game, in pursuit of a seventh championship since 2009. ’Bama will play in the title game for the sixth time in the last seven years.

This will be the ninth time in the last 13 years ’Bama, all under Saban, will play for a title.

Saban and ’Bama are doing their jobs, but it would be nice if they weren’t so good at it.

It would have been nice to see Cincinnati derail some of this, but that dreamed died upon kickoff.