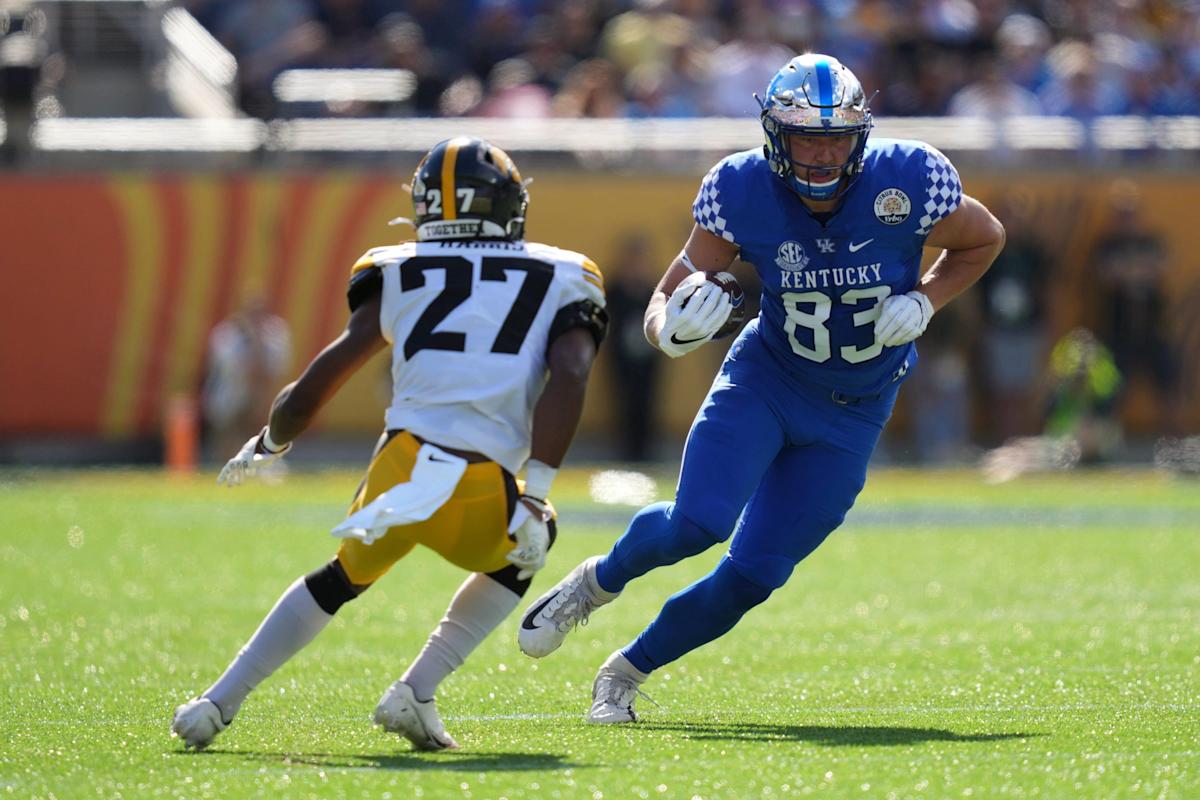 The Kentucky Wildcats football team will cap off its season four weeks after its final game of the regular season against Louisville.

Since the matchup was announced, much attention has been paid to UK coach Mark Stoops’ ties to the Iowa program, beat writer Jon Hale wrote. Stoops played at Iowa from 1986 to 1989, following his brothers Bob and Mike in wearing the Hawkeyes’ uniform.

“My father has my game jersey from the Hawkeyes very neatly folded and placed in his casket where he’s buried with the black and gold,” Stoops said after the matchup was confirmed. “It definitely will mean something to me. Different than anybody else I’ve played, that’s for sure.”

This has been one for the books!

Iowa quarterback Petras was rushed on the throw and Square made a diving interception to seal the win for the Wildcats.

And just like that, UK has found life again and has taken the lead.

Wan’Dale Robinson sets up touchdown with amazing 52-yard catch and run to the Iowa 1-yard line.

A false start on the offense backed the Wildcats up to th 6-yard line, but it didn’t slow down Chris Rodriguez, who broke one tackle behind the line of scrimmage before pushing his way into the end zone to take the lead.

With less than five minutes left in regulation and the Wildcats down 17-13, UK found itself trying to make something happen on fourth and 10 from the Iowa 46.

Levis looked to throw from the shotgun formation, then targeted DeMarcus Harris near the right sideline but was intercepted by Iowa’s Jermari Harris.

Levis throws an INT while trying to force a throw to DeMarcus Harris while under heavy pressure.

That’s better than an incompletion for UK actually. Iowa ball at own 36.

The Hawkeyes have scored 14 unanswered points in the second half and has taken the lead for the first time today.

This drive totaled 92 yards on just nine plays. Iowa scored on a 36-yard pass to Sam LaPorta as he bursts through three Wildcats for the TD.

Petras has amassed 182 passing yards so far in this game with one TD and 2 interceptions. LaPorta has 98 receiving yards and a score.

Iowa sees signs of life on its next possession after getting virtually nowhere most of the game.

The Hawkeyes traveled 50 yards over six plays, capped off by a Arland Bruce IV touchdown run for 20 yards.

Iowa closes the gap to 3 points after the score.

Iowa scores the TD that has felt like it was coming for some time.

20-yard run on a third-and-5 on an end-around. No UK player touched him on the way to the end zone.

UK has come out in the second half with the same defensive energy from the first.

On Iowa’s opening drive, the Hawkeyes penetrated into the red zone for the first time all game and decided to go for it on fourth and one from UK’s 11-yard line.

QB Spencer Petras’ keeper was for no gain and the Wildcats took over possession.

UK put together an impressive defensive showing just before halftime, with Quandre Mosely intercepting an Iowa Hail Mary attempt in the end zone.

Will Levis is 9 for 11 for 91 yards and a touchdown in the first half.

Chris Rodriguez has 56 yards on 10 carries. Wan’Dale Robinson has 61 yards on four catches in the half.

The defense has allowed just 126 total yards with 82 of those through the air.

UK took advantage of the interception and stretched their lead to two possession before the half.

The Wildcats traveled 22 yards on five plays before Matt Ruffolo made a 27-yard kick.

On Iowa’s second play of its next possession, Jordan Wright got his hand on the ball for a deflection, and Jackson dove for the interception. The Cats take over at the Iowa 31.

Jackson was initially expected to miss the entire season an an Achilles’ injury, but has come up big for the Wildcats just before halftime.

D’Eryk Jackson, who was initially expected to miss the whole season with an Achilles’ injury, just got an INT. Really impressive comeback from him.

The Wildcats were able to convert a long third and 26 into a first down when Wan’Dale Robinson put UK in great field position at the Iowa 20 after a 34-yard catch from Levis.

UK wasn’t able to turn that into a touchdown, though, as it found itself tuck at the 3-yard line after an unsuccessful Levis keeper and opted to kick the field goal.

Iowa got a bit of momentum going, traveling 55 yards in 10 plays before the Wildcats put a top to its progress in the red zone.

Hawkeyes QB Spencer Petras is now 7 for 10 passing in the game for 58 yards, but wasn’t able to get his team into the end zone. Iowa instead settled for a 28-yard field goal by Caleb Shudak.

Th Hawkeyes are 0-for-3 on third downs.

The Wildcats are off to a strong start.

After forcing a three and out on Iowa’s opening drive, UK stormed down the field in 13 plays covering 8 yards before a Will Levis pass to RB Chris Rodriguez resulted in a touchdown on the left side of the end zone.

Levis is a perfect 6 for 6 passing to start the game and Rodriguez has 28 rushing yards on the first drive.

ORLANDO – Kentucky football will be without at least eight players normally on the two-deep depth chart for the Citrus Bowl versus Iowa due to a combination of injuries and health and safety protocols initiated by positive COVID-19 tests.

Rosenthal, Weaver, Smoke, Wallace and Bembry had not previously been confirmed to miss the game. UK has declined to identify specific players who have tested positive for COVID-19 throughout the pandemic, so it is not clear if those players are sideline by injuries or health and safety protocols.

Before Saturday’s kickoff, Kentucky quarterback Will Levis Tweeted the cleats he will be wearing in the matchup against Iowa will honor the victims of the Western Kentucky tornado that ripped through the region last month.

Levis stated the cleats will be auctioned off for charity to aid tornado relief at a later date.

The cleats I’m wearing today honor those who lost their lives in the tornado disaster earlier this month. Thank you @truebluecustoms for the help on the inspiration and artistry on these. Will be auctioning them off for charity in the near future to aid in relief 💙 pic.twitter.com/qFECGBEmm1

UK’s defensive end reaggravated an undisclosed injury in the regular-season finale against Louisville then was delayed traveling to Orlando because of another issue, UK coach Mark Stoops announced Friday morning. While Paschal has practiced on a limited basis since arriving in Orlando, Stoops made it clear he is unlikely to play in the game.

“I don’t feel like I could play him with a clear conscious,” Stoops said.

LEXINGTON – Kentucky football will likely be without two of its best wide receivers for the Citrus Bowl.

Super senior Josh Ali and senior Isaiah Epps were involved in a car accident earlier this month that will prevent them from playing in the bowl matchup with Iowa.

“They are OK,” UK offensive coordinator Liam Coen told reporters Monday. “All is well. They are OK but will not be available for the game against Iowa.

“They are totally fine. They’re doing well. They’re here. They’re getting treatment. They’ve been doing all of those things. They’ve been trying to get back to be able to play, but it just doesn’t look like they’ll be available for us in the Iowa game.”

The next game is a big game only because it is the next one.

But even Stoops made no effort to hide the importance of Kentucky facing Iowa, the program he and two of his brothers played for in college, in the Citrus Bowl.

“My father has my game jersey from the Hawkeyes very neatly folded and placed in his casket where he’s buried with the black and gold,” Stoops said in a Zoom news conference Sunday evening after the matchup was confirmed. “It definitely will mean something to me. Different than anybody else I’ve played, that’s for sure.”

How to watch the Citrus Bowl

Eligible subscribers can stream the game online via WatchESPN.

Tom Leach (play-by-play), Jeff Piecoro (analyst) and Dick Gabriel (sideline) will have the UK radio network call on 840 AM in Louisville and both 630 AM and 98.1 FM in Lexington or online at UKAthletics.com.

The Wildcats are a 2.5-point favorite over the Hawkeyes, per the Tipico Sportsbook.

Tipico Sportsbook has the game’s total points set at 44.5.