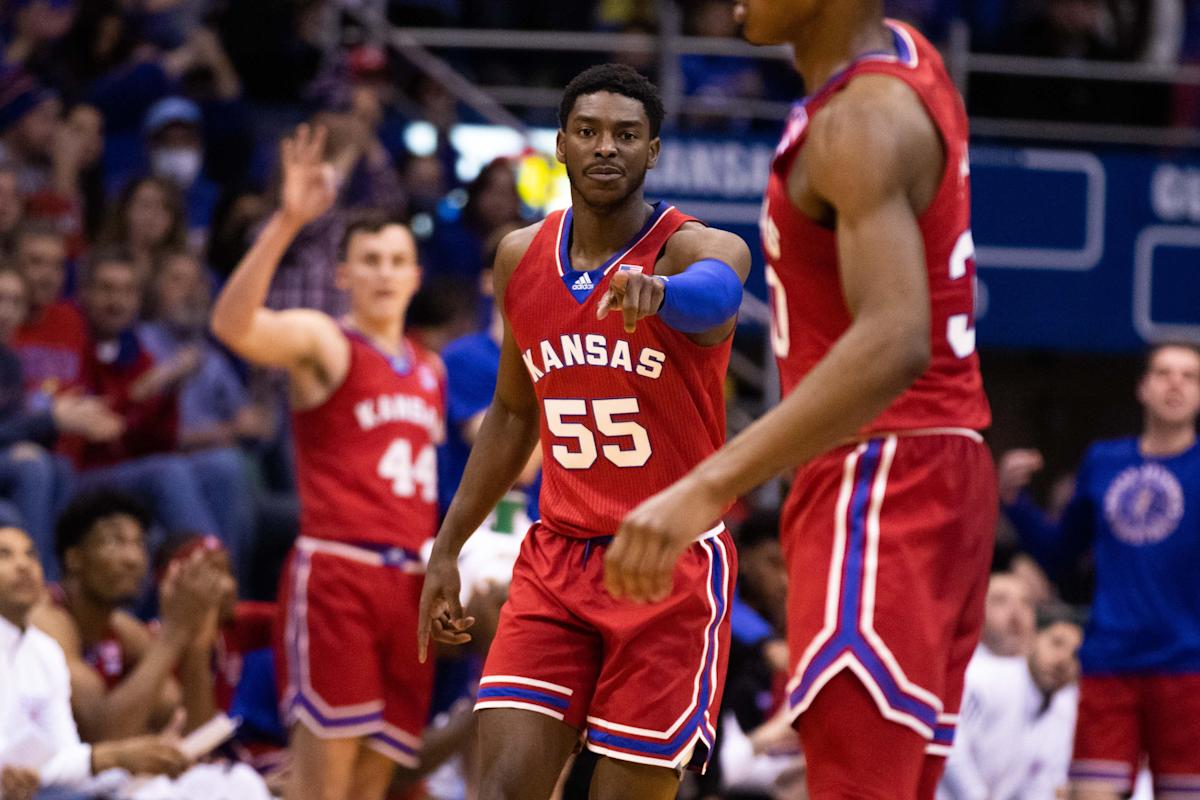 How will Kansas perform in its final game before Big 12 Conference play begins? Will George Mason be able to pull off an upset? Are the Jayhawks going to be able to enter conference play on a seven game winning streak?

Follow along for updates, with the latest news first, from Allen Fieldhouse:

Christian Braun has been taking more 3s today, and has tied his season high with five attempts so far. However, he’s just 1-for-5 from behind the arc at this point. Overall, he’s 2-for-9 from the field with seven points.

Braun does have six assists and three rebounds to go with that point total, though. He also has a +/- of +11. No one on the team has a higher +/-.

The Jayhawks have seen their halftime lead shrink some to seven points through about more minutes of the second half. Their only point has come on a free throw from David McCormack, who it looks like will be subbed out for Mitch Lightfoot after this break ends. At this point, Kansas hasn’t scored in a little more than three minutes.

The Jayhawks have needed offensive production from their bench tonight, and they’ve gotten it so far. Kansas’ bench has accounted for 18 of its points, while George Mason’s bench has no points at all. Jalen Coleman-Lands and Mitch Lightfoot each have eight points to lead the Jayhawks’ non-starters, while Ochai Agbaji and Christian Braun have combined for just 10 points so far.

George Mason was playing a smaller lineup during this stretch, and Kansas did the same. For a time, Jalen Wilson was effectively playing the 5-spot for the Jayhawks in a lineup that also had Ochai Agbaji, Jalen Coleman-Lands, Joseph Yesufu and Christian Braun in the game. Doing so, allowed Kansas to be able to switch one-through-five defensively.

Coleman-Lands is up to eight points today, with a 2-for-3 clip from behind the arc. Overall, he’s 3-for-4 from the field.

Wilson has eight points as well, although he’s 0-for-2 from behind the arc. Overall, he’s 3-for-5 from the field and 2-for-3 from the free-throw line.

Self called a timeout with 8:22 left in the first half after George Mason tied the score at 25-25. He seemed to be upset both with Jalen Wilson, who appeared to allow the Patriots to get a chance at an offensive rebound, and Joseph Yesufu. Yesufu tried to save the ball from going out of bounds and ended up throwing it right to a George Mason player, who scored right away as he was under the basket.

Davonte Gaines leads the Patriots and all scorers with nine points. He’s 3-for-5 from the field and 2-for-4 from behind the arc, with one of those makes seemingly the reason why David McCormack was subbed out again as McCormack was on him.

Mitch Lightfoot has been nothing but an asset for Kansas offensively so far, and leads his team with eight points in the stint he’s had off the bench in place of David McCormack. Lightfoot has hit all four attempts from the field. He’s been able to create issues inside for George Mason that McCormack has yet to be able to do.

Unsurprisingly, the Jayhawks also have an early lead in points off of turnovers. Kansas has four points off of four George Mason turnovers, while the Patriots have no points off of one Jayhawks turnover. That one turnover for Kansas was by McCormack.

The Patriots have the early lead, thanks in part to five points from Josh Oduro. However, Oduro has already picked up a pair of fouls and he came out of the game before the 17-minute mark for an early George Mason substitution.

David McCormack came out and was replaced by Mitch Lightfoot just before this break. This served as Kansas’ first substitution.

Offensively, things aren’t going well so far for the Jayhawks. And defensively, they’ve allowed the Patriots to go 2-for-4 from behind the arc to start this one.

Kansas won the opening tip, and this one is underway.

Among other things, Self discussed the importance of his team’s defensive effort. A key for the game, in his mind, will be not allowing George Mason to be comfortable offensively. A significant part of the Patriots’ game is taking 3s.

Here’s who is starting

Jalen Wilson will start in place of Remy Martin today. Martin will miss the game because his knee swelled after a fall on Wednesday. MRI was negative, per Bill Self on ESPN+. #KUbball

Jankovich, a Jayhawks walk-on junior guard, talked about returning from the injury that kept him out for a time a season ago. He’s enjoying playing again in front of the fans at Allen Fieldhouse. It’s his role, as well as other’s, to work with assistant coaches on the scout so the Kansas players who play regular minutes have a better idea on how opponents will play.

Martin, the super-senior guard who’s started each game so far this season for the Jayhawks, isn’t going through warmups with the team about a half hour prior to tip-off. If this affects his place in the starting lineup, one would think redshirt sophomore forward Jalen Wilson would take his place.

Martin appeared to hurt his knee last game, but did play through it. On Kansas’ pregame show, it was said that Martin was dealing with a minor knee injury.

Townsend, an assistant coach for the Jayhawks, touched on a number of topics ahead of tip-off. He discussed how talented he thought English was in college, and George Mason’s season to date. Townsend highlighted that three of the Patriots’ defeats have been by four points or less, indicating they could have a much better record than they have at the moment.

Townsend hopes both Christian Braun and Ochai Agbaji can continue to be the talents on the wing for Kansas that they have been so far this season. Townsend said the positives of Dajuan Harris Jr.’s life right now couldn’t be happening to a better kid. When it comes to keys for a Jayhawks win, two things Townsend mentioned were defending the 3-point shot well and defending Josh Oduro inside as well.

Jordan Guskey covers University of Kansas Athletics at The Topeka Capital-Journal. Contact him at [email protected] or on Twitter at @JordanGuskey.