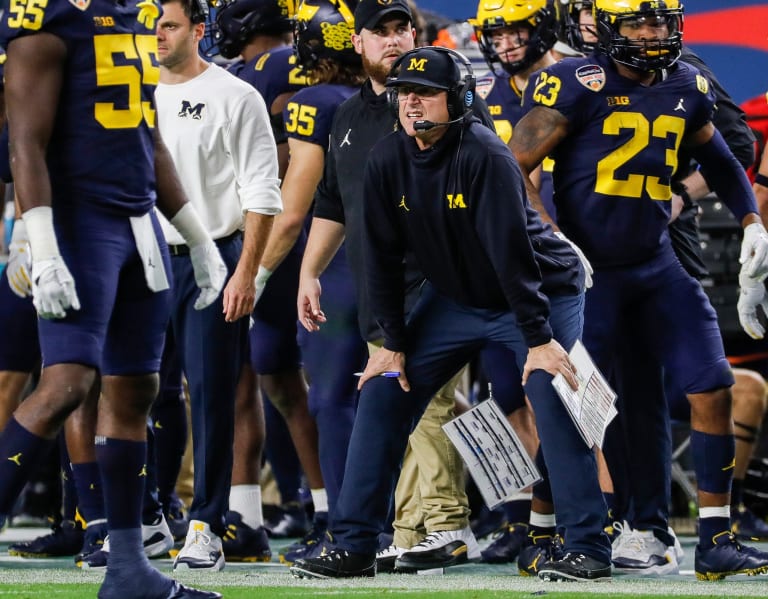 There is perhaps no better illustration of how Friday night’s Orange Bowl went for Michigan than the contrast in when the two teams were able to get the matchups they wanted. For Georgia, it came on the first drive. For Michigan, it was on one of their last.

“Yeah, I mean, the swing route to Bowers, it looked like they hit a sluggo there with their running back on our linebacker, same exact play we have in our offense, and ran it toward the end of the game there when you saw Donovan matched up on their linebacker,” Michigan head coach Jim Harbaugh said after the game. “He ran the same exact sluggo — slant go, and were able to hit that, too. That match-up we were looking for, they got, and both teams were able to convert it.”

“Offensively we were able to make just about every drive we had had a 1st down in the first four drives. We had one three-and-out, and then weren’t able to convert, make the big play, get the ball into scoring territory,” Harbaugh said. “Had some 4th downs, didn’t convert those, and then unfortunately we turned the ball over a few times, and then we lost the ball in the lights one time on an offensive throw and they got an interception in the end zone.”

The play he is referencing in the previous sentence is a throw from Cade McNamara intended for Daylen Baldwin on the far left side of the end zone. It was the 11th play of Michigan’s first drive of the third quarter, and had Baldwin not lost the ball in the lights and made the catch it might have been a 27-10 game. That wasn’t to be, though. Michigan made a quarterback change in the second half, replacing McNamara with J.J. McCarthy because Harbaugh said the protection from the offensive line wasn’t where it needed to be and McCarthy gave them a better chance to escape pressure.

The offense showed signs of life, but still had difficulty finishing. Michigan averaged 5.9 yards per play in the second half and recorded 224 total yards but put just seven points on the board.

“Our offense was moving the ball there in the second half. We had those drives — could have converted on two drives before, but got to give credit to the Georgia defense. They’re a tough team to score on,” said Harbaugh. “Like I said, our guys keep fighting, the way they always do.”

Michigan may have fought, but they got punched in the mouth from the outset. Harbaugh was able to distill the game into one paragraph when asked whether Georgia’s early success forced Michigan away from what they had planned to do.

“Yeah, they did a very good job early in the game, first half especially, of extending drives. They were able to bleed out yards on the perimeter with some of the bubbles and swing routes. Then hit the big play. They got the swing route early to Bowers, that was big, and we lost the ball on the lights on the deep throw.

“They were able to bleed out the yards and pick up the 1st downs. I thought they were really effective, and on 1st down, they must have had eight or nine 3rd-and-shorts. They were able to get the ball to 3rd-and-1, 3rd-and-2 and convert those 1st downs and keep the chains moving and couldn’t get them out of that rhythm early.”

Harbaugh’s explanations offer insight into the many pressure points Georgia hit. There was no one thing that derailed Michigan’s offense or defense and thus their season; instead, the overarching umbrella of “execution” must be invoked.

“Got to give them credit,” Harbaugh said, one of three times he did so while at the podium. “They executed well. Game plan was good, and we weren’t able to keep pace.”

Not a subscriber to The Maize and Blue Review? Sign up today!

Discuss this article on our premium message boards

Subscribe to our podcast on Apple Podcasts, Google Podcasts and Spotify