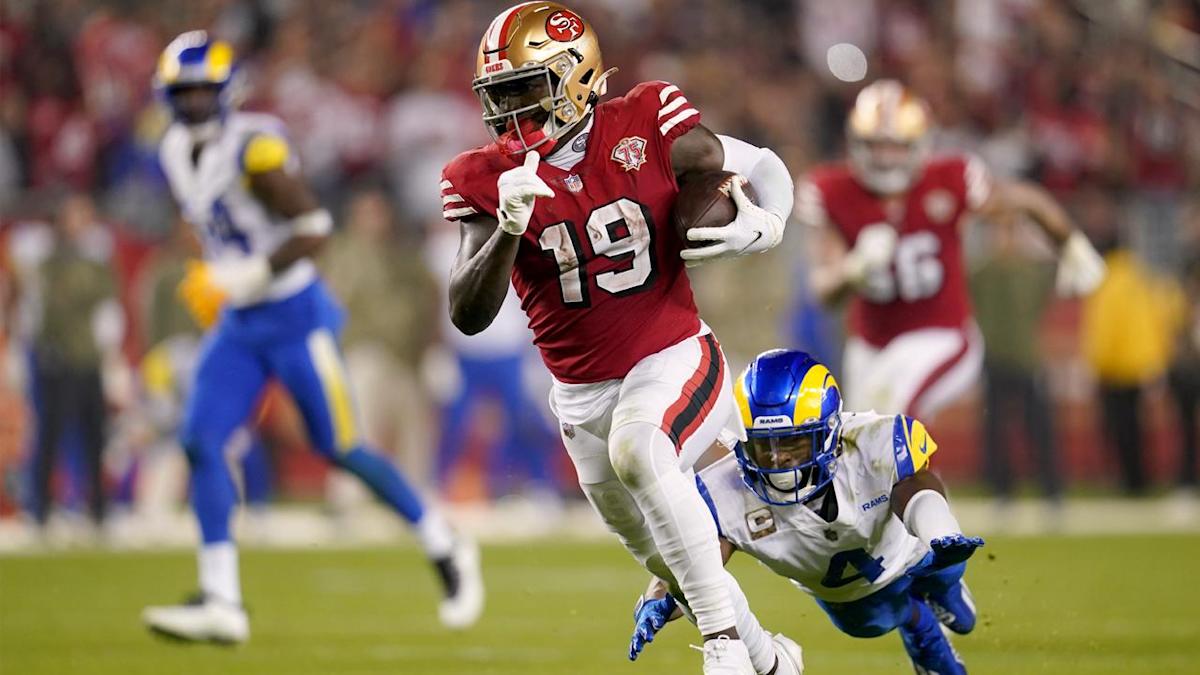 How 49ers’ Week 18 game vs. Rams could get moved to Saturday originally appeared on NBC Sports Bayarea

Depending on the results of Week 17, the 49ers’ final regular-season game against the Los Angeles Rams could mean everything.

Or, it could mean nothing.

And that could impact what time — and even what day — the 49ers close out the regular season.

The NFL will move two games with playoff implications to Saturday, Jan. 8. Those start times are scheduled for 1:30 p.m. and 5:15 p.m.

Also, the league will aim to have its most important stand-alone game in the Sunday night time slot.

The two Saturday games will feature teams forced to play on short weeks with short notice. The NFL plans to announce the Saturday games no later than Monday night.

“Honestly, I haven’t even thought about it, until you just asked that,” 49ers coach Kyle Shanahan answered on Friday during a video call with Bay Area reporters.

“I guess that does make sense, but I haven’t thought past this game. They’re all big, but we know how big this one is, so if that happens great. We’ll be ready for it.”

Sources with knowledge of the NFL’s thinking told NBC Sports Bay Area that the league’s goal is to schedule Saturday games that have playoff implications but do not involve scenarios in which any of the teams can clinch playoff spots.

The NFL does not want any of the Saturday games to detract from the importance of the Sunday games.

The 49ers enter this weekend in control of their own destiny for a playoff spot in the NFC. If they beat the Houston Texans on Sunday and the Rams in Week 18, they would clinch a playoff berth. The 49ers can clinch as early as Sunday with a victory over the Texans coupled with a New Orleans Saints loss to the Carolina Panthers.

The 49ers are currently the No. 6 seed in the NFC. (Seven teams in each conference qualify for the playoffs.) The NFC West-leading Rams are the No. 3 seed.

The NFL will likely try to schedule Saturday games that involve teams currently out of the playoff picture that need a victory, as well as another team or two losing on Sunday, to qualify for the playoffs.

The league will also look into scenarios in which teams have a chance to earn a first-round bye in the playoffs as the No. 1 seed with a victory and a loss of another team on Sunday, Jan. 9.

That could be a scenario that makes the 49ers-Rams matchup attractive as an option on Saturday even if the 49ers clinch a playoff spot in Week 17. The Rams are currently No. 3 and would require Green Bay and Dallas to stumble along the way.

The possibilities for attractive Saturday games for next week are nearly endless. With two games remaining in the regular season, only eight of the 32 NFL teams have been mathematically eliminated from the postseason: Jacksonville, Detroit, Houston, New York Giants, New York Jets, Seattle and Chicago.