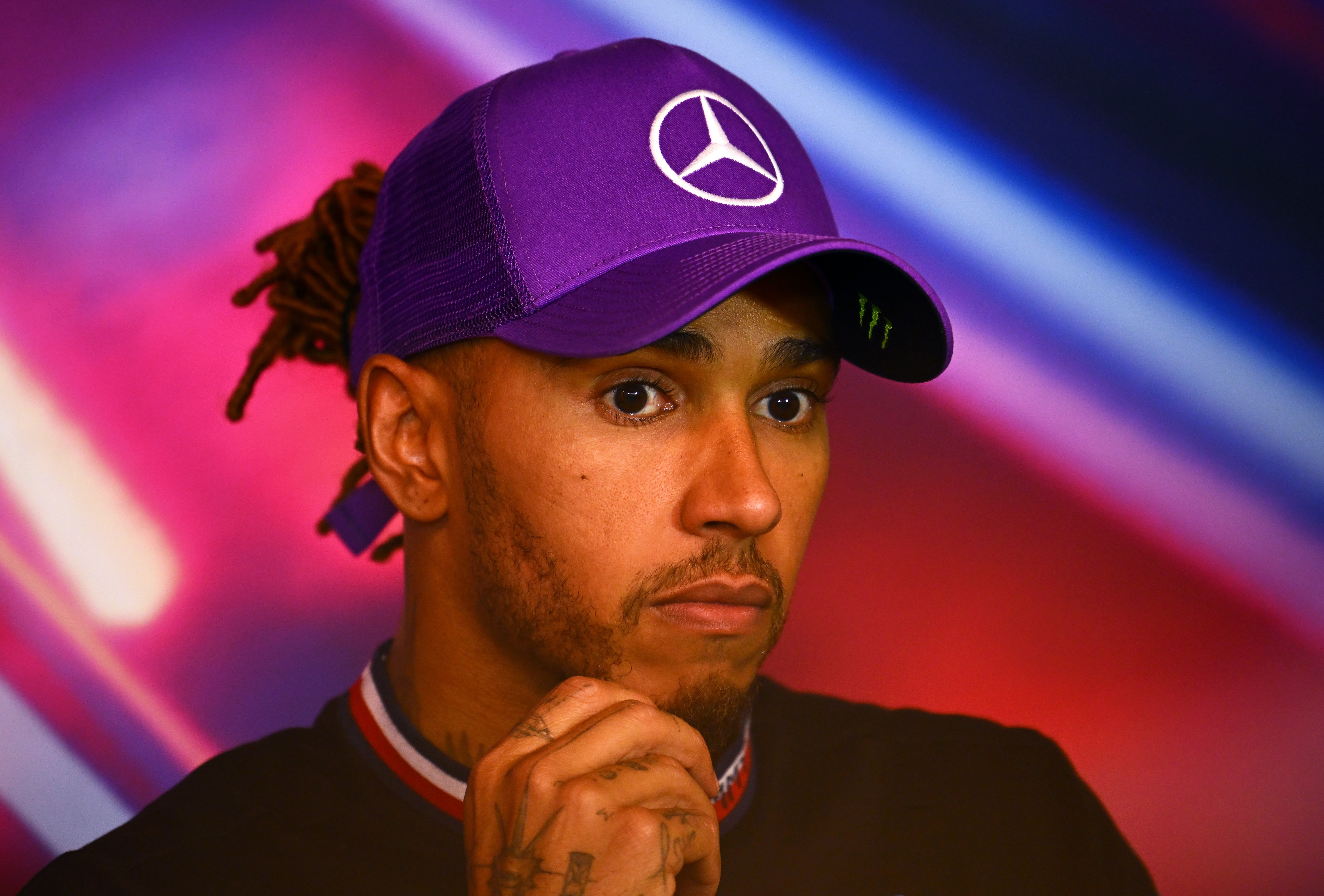 Formula 1 legends Sir Jackie Stewart and David Coulthard have urged Lewis Hamilton to ‘step aside’ and ‘retire’ from the sport to avoid the ‘pain’ of not being able to compete as he used to behind the wheel. Hamilton has struggled to adapt to Mercedes new W13 car in 2022 only finishing on the podium twice in nine races and has repeatedly been out-driven by teammate George Russell. He sits almost 100 points behind rival Max Verstappen in the standings and the Silver Arrows are still coming to terms with their car being the third-fastest on the grid.

Stewart explained that he feels Hamilton is finding it difficult to handle the skill of his new teammate and doesn’t believe the seven-time wolrd champion can make it back to the top level of the sport saying: “He’s now struggling a little bit because he’s had a new teammate who’s been quicker than him in qualifying so far, which is gonna be difficult for him to handle. It’s a pity he wasn’t resigning at the top but I don’t think that’s gonna happen now.”

Ex-Formula driver Coulthard believes that Hamilton still has more to offer Mercedes but should focus on getting to grips with the car instead of voicing his concerns over the physical toll it’s taking on his body. “You take the pain, whether it’s through your lower back. What I would say is if any driver feels uncomfortable, if any driver feels like he’s doing himself long-term damage – step aside.”

Follow all the latest F1 news and build-up to the British Grand Prix below.

Formula 2 driver Juri Vips has been suspended by Red Bull after using racist language during a live gaming stream.

The 21-year-old Estonian has been stood down from all team duties pending an investigation to the incident on Tuesday.

“As an organisation, we condemn abuse of any kind and have a zero-tolerance policy to racist language or behaviour within our organisation.”

Vips, currently in his third F2 season, took to his Instagram account to apologise for his “unacceptable” language.

With Formula One returning to Montreal for the first time in three years, it was the Red Bull of Verstappen which took the chequered flag to move 46 points clear at the top of the standings.

Sainz was fast in the closing stages but could not find a way past Verstappen and had to settle for second place, the pair joined on the podium by Lewis Hamilton – the seven-time world champion taking third for Mercedes.

His team-mate George Russell continued his record of top-five finishes all season as he took fourth ahead of Charles Leclerc, who recovered from starting 19th to claim a decent haul of points.

Kevin Magnussen says F1’s race control is still to easy to influence, an accusation which had been levelled at the FIA following the controversial finish to last season’s championship.

Masi was sacked but race control remains easy to influence, according to Magnussen, who was sent to the pits to repair damages at the Canadian Grand Prix after the driver behind him, Esteban Ocon, had complained over race radio.

“I was just talking to Ocon now and he was joking how he told the FIA that it [Magnussen’s car damage] was really bad,” Magnussen said after the race. “If you know you can influence the FIA like that, you’re going to do it, aren’t you? Which he sort of did, and fair play. But you’ve got to let us drive with that s**t, it’s nothing. I just had a bit of contact, nothing serious. Scratched my front wing a little bit and then was told to pit.”

Three-time Formula 1 world champion, Sir Jackie Stewart, had urged Lewis Hamilton to retire from the sport to avoid the ‘pain’ with not being able to compete to his previous high standards. The Scot doesn’t believe Hamilton can reach his former heights and that he would be better served stepping away from the sport.

Speaking to the Convex Conversation Podcast, Stewart said: “It’s time for him to resign.

“He’s got music, he’s got culture, he loves clothing and the rag trade would be absolutely suitable for him. I’m sure he’ll be very successful because he’s been earning a huge amount of money, rightfully so because he’s been the best of his time.”

Stewart added it is difficult for Hamilton to handle being beaten by teammate George Russell this season with the former Williams driver finishing ahead of Hamilton at all but two races in 2022. Things have been so bad for Hamilton this year that he has only picked up two podiums from the first nine races and he trails championship leader Max Verstappen by 100 points.

“He’s now struggling a little bit because he’s had a new teammate who’s been quicker than him in qualifying so far, which is gonna be difficult for him to handle.” added Stewart. “Lewis is in that group of the Ayrton Sennas and the Alain Prosts or even the Jackie Stewarts maybe.

“It’s a pity he wasn’t resigning at the top but I don’t think that’s gonna happen now. But nevertheless it’s wiser to stop than go through all the pain of not being able to do what you did before.

“He’s carried the sport very well. I would like to see him resigning now.”

Max Verstappen has said Formula One does not need to “overdramatise” the issue of porpoising following complaints from some drivers, including Lewis Hamilton and George Russell, that it could pose a long-term injury risk.

The ‘bouncing’ of cars along straights has been one of the main issues this season following the overhaul of rules and regulations, with some teams suffering more from the phenomenon than others.

Mercedes have been particularly affected, with Russell warning of the potential “health consequences” of porpoising while Hamilton endured the “most painful race” of his career in Baku after suffering from severe back pain due to the bouncing.

It led to the FIA introducing a controversial technical directive in an attempt to fix the problem, but Red Bull have reacted angrily as out of all the teams on the grid they have been the least affected by porpoising due to the design of their car.

After a difficult weekend in Canada with McLaren, Lando Norris is looking forward to returning to British shores and racing at Silverstone in a couple of week’s time.

He believes that the home fans will have a big impact on how McLaren fare in the race and is expecting to challenge for the points again.

“We have a few things in the pipeline for Silverstone and I cannot wait to get out there, in front of our home fans.” said Norris in an article for The Daily Telegraph.

“Just the drive into Silverstone is like nothing else, all that positive energy, from the marshals on the gates when you first arrive in the morning, to the fans waving union flags or wearing McLaren colours.

“You feed off the support. It makes a massive difference.”

Fernando Alonso threatened a massive upset after finishing qualifying on the front row in P2 alongside Red Bull’s Max Verstappen but engines issues and a bit of misfortune with the virtual safety car cost the Alpine valuable time during Sunday’s race before a five second penalty for weaving dropped the two-time world champion down to P9 after the race.

“Yeah, we were unlucky once more with the VSC,” said Alonso. “I was just on the start-finish line when it came and I was just entering the pits when it ended so we decided to stay out, so I was a little bit unlucky there. But the biggest problem was the engine, we had an engine problem in Lap 20 or something like that.

“I was losing, like, one second a lap with the engine deployment, and from that moment we forgot about the podium, or retiring the car, we were just staying on the DRS train with the cars in front just to defend. But it was very difficult to stay with Esteban [Ocon] or Charles [Leclerc] because on the straights we were losing one second.

“I think this weekend we deserved better than ninth position,” he added, “but it’s still good for both cars to score points in the end. We ultimately lost a big opportunity to fight for a potential podium as I felt like I had the pace to do so.”

Charles Leclerc was able to mitigate the damage caused by his lowly start by finishing fifth in the Canadian Grand Prix, but was left ruing a “frustrating” race.

“It was very frustrating actually,” the 24-year-old told Sky Sports F1. “The last part was nice but obviously the very first part I was stuck in a DRS train and couldn’t do anything.

“Then in the middle part of the race I found myself stuck behind Esteban [Ocon] on much newer tyres so he had very good traction and that was enough to keep me behind.

“Then we had a slow pit stop and fell behind another DRS train, but the end was quite fun. I had to be aggressive to get more points and fifth is the best we could manage.

The seven-time world champion claimed just his second podium finish of the season at the Canadian Grand Prix last weekend but was left frustrated by the Mercedes W13 car during practice.

Hamilton called the Mercedes “undrivable” and insisted their problems with ‘porpoising’ and ‘bouncing’ were “only getting worse” the more the team tinkered with the set-up of the W13.

Mercedes were eventually able to put Hamilton into position to finish third in Montreal, behind race winner Max Verstappen and Carlos Sainz, and the 37-year-old hopes the team have learned their lessons ahead of Silverstone.

Once a late safety car had drawn them close together around the parkland streets of Montreal, Max Verstappen and Carlos Sainz were threatening to produce a thoroughey thrilling end to Sunday’s Formula One Canadian Grand Prix, as two men driving the fastest cars in the field set off on a 15-lap shootout for victory.

Sainz, the Ferrari driver who through a combination of poor fortune and fundamental errors has fallen by the wayside in this season’s title fight already, was clambering all over Verstappen’s gearbox in the final portion of the race as he hunted his first victory in the top tier of motorsport. Separated by less than a second, on fresher tyres, and with the marginally quicker car on the day, the 27-year-old Spaniard seemed destined to pass his former teammate and step onto the top step of the podium for the first time in his eight-season career.

On each tour of the circuit before the chequered flag was waved, Sainz was able to use the assistance of F1’s DRS system to draw himself in towards Verstappen’s rear wing along the Circuit Gilles Villeneuve’s long back straight. With the straight-line speed advantage afforded to him by DRS, making a pass just once in 15 attempts should have been possible.