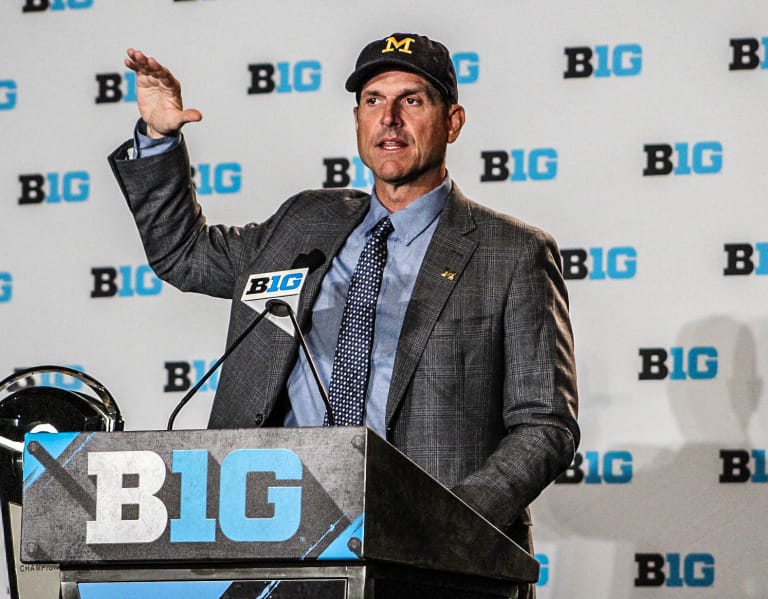 It’s hard to beat the cheaters.

Those were the words uttered by Jim Harbaugh to author John U. Bacon in his book “Overtime: Jim Harbaugh and the Michigan Wolverines at the Crossroads of College Football.”

Harbaugh was laughed at for this assumption. Told he was jealous that he couldn’t get over the Ohio State hump and make it to the College Football Playoff.

Not a subscriber to The Maize and Blue Review? Sign up today to gain access to all the latest Michigan intel TMBR has to offer

Some also assumed he was referring to the SEC, even though he didn’t mention any programs specifically by name.

Love him or hate him, Harbaugh has never been one to shy away from speaking his mind. For better or for worse, you always know what Harbaugh is feeling about any situation he discusses.

In the latest drama surrounding Nick Saban, Jimbo Fisher, and SEC in-fighting about whether players were paid to come to their program or not, one thing is abundantly clear.

From Bacon’s book, Harbaugh hasn’t been shy to rattle the cages of coaches around the nation, including the SEC. Harbaugh insists, publicly, that his program says and does the right things when it comes to recruiting.

Harbaugh, who has made plenty of enemies south of the Mason-Dixon line since taking over at Michigan, has poked the cages of SEC coaches repeatedly and in the book, speaks to the disparity in spending by simply telling Bacon, “(It’s) hard to beat the cheaters.” Yet, despite the unleveled nature of the playing field as he sees it, Harbaugh continues to sell the program in his own way without crossing the line he insinuates is repeatedly crossed by other programs. Harbaugh’s own experiences as a Michigan player have direct ties to the ways he handles his coaching duties now.

Mind you, this book came out before the one-time transfer, and NIL rules were put in place.

These accusations being sent aren’t a new phenomenon. These actions are now ‘legal’ and can be brought out into the light without repercussions.

On Thursday, Texas A&M coach Jimbo Fisher responded to claims made by Alabama coach Nick Saban that the Aggies ‘bought’ their top-ranked recruiting class during the 2022 cycle, which Saban lamented that his Crimson Tide finished a lowly second place in the recruiting rankings by doing things ‘the right way.’

“You’ve read about them. You know who they are. We were second in recruiting last year, A&M was first. A&M bought every player on their team, made a deal for name, image and likeness. We didn’t buy one player. But I don’t know if we’re going to be able to sustain that in the future because more and more people are doing it.

Irate, Fisher responded with a 15-minute press conference excoriating Saban, a man Fisher worked under and defended his program and the way the Aggies conduct themselves.

“Some people think they are God. Go dig into how God did his deal and you may find out a lot about a lot of things you don’t want to know. We build him up to be this czar of football, go dig into his past. You can find out anything you want to find out or what he does or how he does it.”

If Fisher knows these transgressions, why aren’t they brought out for the public to discuss?

We already have other programs open accusing others of tampering with the transfer portal. The airing of dirty laundry won’t stop with two programs.

This all goes back to my original point.

Jim Harbaugh was right. He always was.

And that’s not to say that Harbaugh is not a proponent of players making money while playing college football.

During his appearance on the Bussin’ with the Boys’ podcast, Harbaugh shared his thoughts on NIL being an aid to overall experience of playing collegiate football.

“I’ll give you my take on it, which is I think it’s a very good thing. I think players should be able to profit off of their name, image and likeness. But I don’t want to lose what Michigan is, and it’s a transformational experience, not a transactional experience. But with the NIL, it can become transactional. We’re not going to recruit players and be promising them money to come here. But, it’s been proven. You come here and you play well, then your jersey starts selling, and you start getting these deals. We have players that are making, from what they’ve told me, in the hundreds of thousands of dollars.”

— Jim Harbaugh on the Bussin’ with the Boys podcast

Say what you will about Harbaugh, what you can’t say is that he doesn’t have the best interest of his players in mind.

He was right. Now give the man his due.

Discuss this article with our community on our premium message boards

Subscribe to our podcasts: Apple Podcasts, Google Podcasts and Spotify