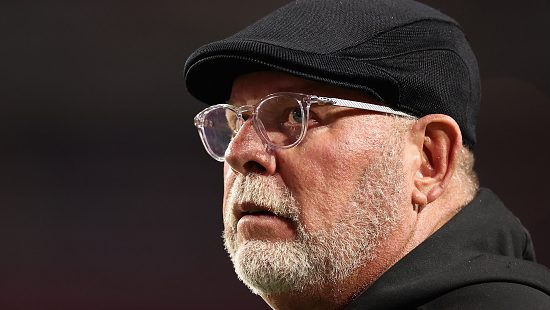 Last April, Buccaneers coach Bruce Arians handed the baton to Todd Bowles, with the goal of helping avoid staff turmoil. Turmoil nevertheless came, with nine staff members gone from a staff that was supposed to provide consistency and continuity.

“I control the narrative right now,” Arians explained to Peter King after stepping down. “I don’t control it next February because [if] Brady gets hurt, we go 10-7, and it’s an open interview for the job. . . . I got 31 [coaches and their] families that depend on me. My wife is big on not letting all those families down.”

So how is Arians feeling about the moves?

“Having had some interaction with him about it . . . he’s disappointed,” Stroud said. “You know, he’s disappointed. I guess that’s the biggest thing. You know, he wanted Todd to have this opportunity. He wanted to keep this staff together. He wanted these [coaching] families to be together. Many of them have another year on their contracts. Many of them thought they would be here as long as Todd is the head coach, were told as much, and that’s not the case. And so he’s hurt by it. I don’t know if you’re going to see him around much next year.”

Arians spent 2022 in a made-up job, furthering the perception that he was forced out, not that he chose to walk away. With his contract now expired, Arians can go wherever he wants.

He’s officially retired. Then again, he was retired when he went to work for the Colts in 2012. He also was retired when he took the job in Tampa Bay. Although Arians has been connected to no head-coaching vacancies for 2023 (maybe he should be), Arians could serve an important role with a team that would benefit from his knowledge, experience, and expertise.